With this being a particularly tough flu season, the Middlesex County Office of Health Services is offering additional times for community members to receive a flu shot.

“Everyone 6 months and older should get a flu vaccination each year,” Middlesex County health officials said in a statement on Friday, “and practice good health habits to help protect yourself and others against the flu.”

“Stopping the spread of the flu remains a critical public health priority, which is why we have recently launched a significant public awareness campaign within my first few weeks on the job,” said New Jersey Department of Health acting Health Commissioner Shereef Elnahal. “We take every reported case of a pediatric flu-associated death very seriously.”

Overall, the New Jersey Department of Health reports 14,065 positive tests of some form of influenza this season as of its Feb. 10 week-ending report. However, those numbers are only a snapshot of influenza since not all cases of flu have lab testing. The actual number of people who had the flu this season is likely higher, the department said on Wednesday.

Despite the rising number of deaths linked to the flu, Friday’s CDC report showed that hospital visits related to influenza declined. According to the CDC, vaccines are preventing 36 percent of cases, and have nearly a 60 percent success rate in children. A majority of the pediatric deaths are from children not vaccinated, the CDC reported this week. But despite some signs of slowing down, the CDC noted that the Influenza B virus has been increasing this season in a tweet.

Week 6 #FluView: Most of the U.S. continues to experience intense, widespread flu activity. While H3N2 viruses are still most common, there is an increasing number of influenza B viruses detected. Flu activity will likely continue for several more weeks. https://t.co/c7xNOnxJAE pic.twitter.com/TigreLqmJp

In Monroe, Township officials said Friday that they’ve been coordinating efforts to combat the spread of the flu with the Middlesex County Office of Health Services “for several years now at the onset and for the duration of the flu season.”

“Due to the recent surge in reported flu cases, Monroe has helped promote the county’s ongoing flu vaccination clinics, held in nearby municipalities, on its official website and Facebook page for several weeks now,” the Township said in a statement on Friday.

Activity levels for influenza-like illnesses reported throughout the United States as of Feb. 10, 2018. Credit: Centers for Disease Control and Prevention

Aside from standard safety practice such as provide hand sanitizer at public facilities, the township has reached out to its senior population through various senior-centric publications. In an October column from Councilwoman Miriam Cohen, she wrote in part, “There are a number of preventative measures that you should take to avoid contracting or spreading this illness, including staying home when you’re not feeling well, avoiding contact with others who are under the weather and regularly cleaning your hands.”

In addition to offering flu shots, Middlesex County officials said they also provide educational services and materials to help prevent the spread of flu and other illnesses.

“The Health Education division provides healthy habits courses, such as handwashing, to pre-school and elementary school children and presentations on disease reporting,” the department said, “and prevention to school nurses, long-term care facilities and other agencies that provide services to at-risk populations.”

According to the CDC, vaccines are preventing 36 percent of cases, and have nearly a 60 percent success rate in children. A majority of the pediatric deaths are from children not vaccinated, the CDC reported this week. 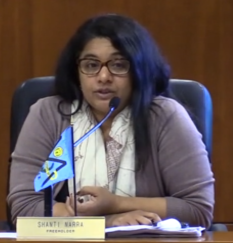 “This flu season has been very active,” said Freeholder Shanti Narra during the Feb. 15 Board of Chosen Freeholders meeting,” and it is unknown when it will end, but has been known to go into April and May in previous years.”

Flu shots may also be obtained at most major pharmacies and urgent care clinics. Make sure you call to determine availability and cost.