One of Broadway’s most popular and endearing shows, “Fiddler on the Roof,” will kick-off the 2018 summer season of Middlesex County’s “Plays-in-the-Park,” when it opens on June 20 in Edison.

For more than 50 years, Plays-in-the-Park has provided affordable productions at Roosevelt Park in Edison, with the support of the county government and community theaters.

“Fiddler on the Roof,” will have 10 performances, each beginning at 8 p.m. There is no show on June 24. The Broadway play stars local actor and director Paul Whelihan as Tevye, a poor milkman with five daughters, who is a support of the traditions of his faith but he finds many of his convictions tested by his three oldest daughters’ actions. 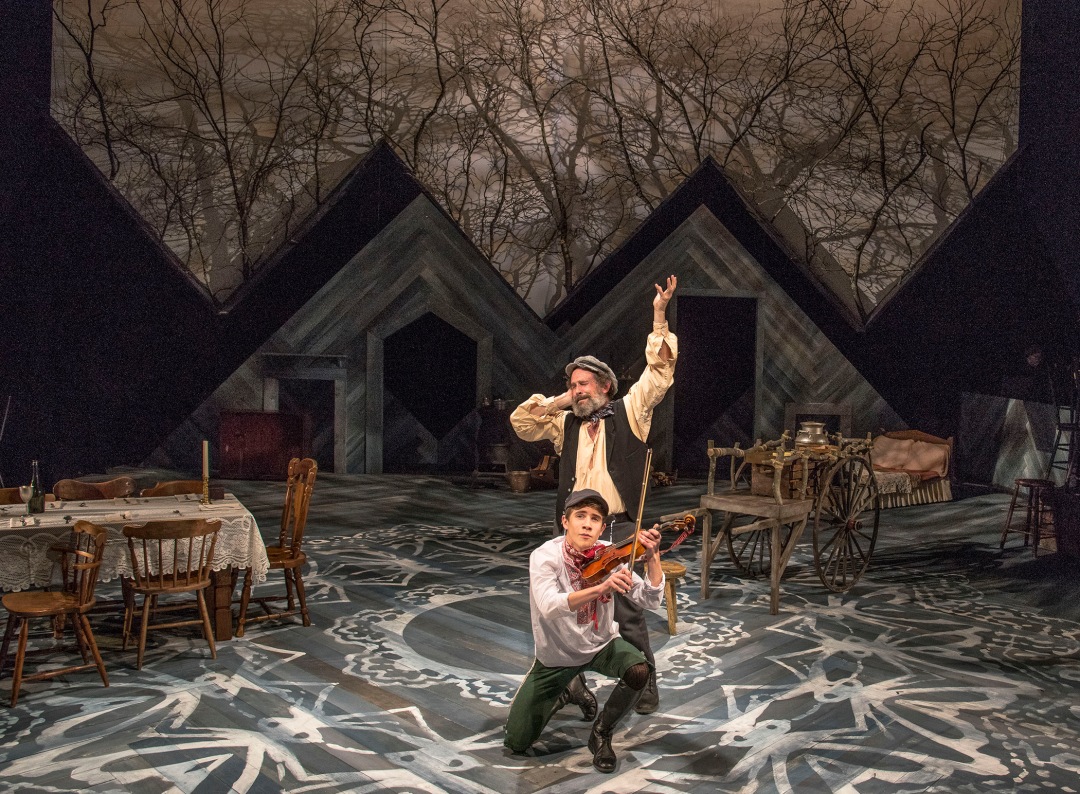 Jeremiah Kissel and Dashiell Evett in the 2016 production of ‘Fiddler on the Roof,’ at the New Rep Theatre in Watertown, Mass. Middlesex County’s Plays-in-the-Park summer theater series will includes the famed production in its lineup beginning on June 20. (Photo Courtesy of Andrew Brilliant)

When it originally opened in 1964, it won nine Tony Awards, including Best Musical, Score and Book. It is a series of short stories created by Sholem Aleichem and a book by Joseph Stein, with music by Jerry Bock and lyrics by Sheldon Harnick. The show is set in the little village Anatevka in 1905 Imperial Russia.

Rounding out the cast are Hannah Schroeder as Tevye’s wife, Golde, Kelliann DeCarlo, Emma McGahan, and Emma Schwartz as Tevye’s three daughters Tzeitel, Hodel, and Chava, with their suitors Motel, Perchik, and Fyedka played by Justin Brown, Matt Maiolo, and James Lynch. Also joining the cast is David Hampson as Lazar, the butcher, and Lorraine DeMann as Yente, the matchmaker.

“‘Fiddler on the Roof’ looks to be an impressive start to this year’s season of Plays-in-the-Park,” said Freeholder Charles Kenny. “I know the cast, crew and staff will make this a show to remember for all our residents.”

The play is directed by Gary P. Cohen, with choreography by Michelle Massa and musical direction by Matt Hosmer.

“No other musical has so magically woven music, dance, poignancy and laughter into such an electrifying and unforgettable experience,” said Freeholder Director Ronald G. Rios. “Whether this is your first time or your fiftieth, “Fiddler” is a story that stays with you forever.”

“Mamma Mia!,” set on a Greek island is about a daughter’s, on the eve of her wedding, quest to discover the identity of her father brings three men from her mother’s past to the place they last visited 20 years ago. It is set to well-known songs from ABBA.

In “You’re a Good Man, Charlie Brown,” once again, the world’s favorite hapless hero is at the center of the action as he and his famed pals leap from page to stage with a series of vignettes that bring out the kid in all of us and showcase some important lessons on the meaning of love, life and friendship.

Tickets for the all shows are available the night of the performance. The box office opens at 5:30 p.m. Tickets are $7 for adults and $5 for individuals at least 60 years old. Children under 12 can view the performances for free. Military service members and their families can receive free admission to the shows. Veterans and a guest can receive complimentary tickets for shows on Mondays and Tuesdays.

During the season, there will also be donation boxes to support the Middlesex County Food Organization and Outreach Distribution Services. For those interested in making a donation, the request is for non-perishable food items.