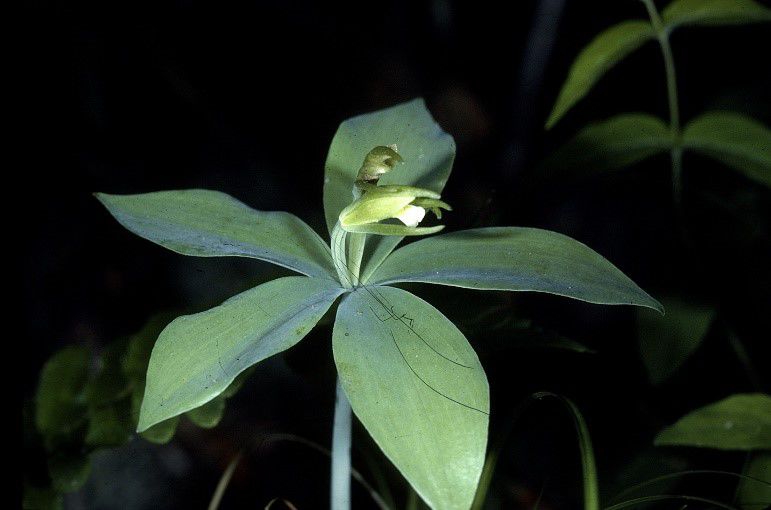 Biologists discovered the orchid, also known as small whorled pogonia, which is listed as endangered in New Jersey and as threatened by the federal government.

The orchid, lsotria medeoloides, can grow up to 10 inches tall and features a “whorl of four to five leaves that encircle the steam,” according to the DEP.

The plant was found on stony ground at the Stokes and is just the third finding of this species known in the state.

Martin Rapp, a biologist with the DEP’s Office of Natural Lands Management, found the new population on June 6 while surveying potential sites that could support small whorled pogonia.

“While small and inconspicuous, this plant’s presence indicates a healthy and thriving forest ecosystem,” said New Jersey Parks and Forestry Director Olivia Glenn. “I’m thrilled that biologists discovered this elusive orchid in a state park where we can monitor, manage and protect this rare find.”

The small whorled pogonia does not appear above ground every year and may remain dormant underground for years.

“Small whorled pogonia previously occurred in Bergen, Hunterdon, Passaic and Sussex counties, but the orchid has not appeared on many of these sites in decades,” said Bob Cartica, Administrator of the Office of Natural Lands Management. “That’s one of the mysteries of this orchid – suitable habitat exists throughout its range, but populations of small whorled pogonia are rare.”

Historically, the small whorled pogonia’s range comprised 21 eastern states and parts of Canada. However, the orchid has never been a common species and typically grows in small populations. It prefers drier upland sites, usually in mixed deciduous forests.

Located in the extreme northwestern corner of the state, the nearly 16,500-acre Stokes State Forest encompasses a portion of Kittatinny Mountain and straddles the Appalachian Trail, north of the Delaware Water Gap National Recreation Area.