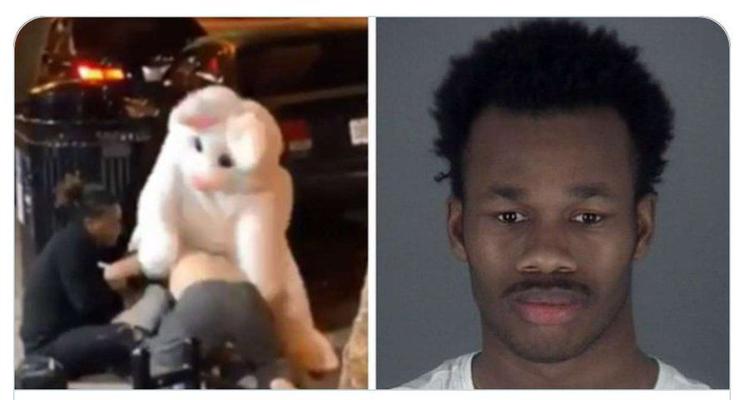 SOUTH BRUNSWICK – A video showing an Easter Bunny intervening in a fight between two people near a comedy club in downtown Orlando has become a social media star.

But, there is a problem.

The seemingly Good Samaritan Easter Bunny is wanted by South Brunswick police for allegedly breaking into a car last September and connection to other similar burglaries.

South Brunswick police confirmed the man dressed as the Easter Bunny in the viral video is Antoine McDonald, 20. He is also wanted, according to multiple reports from Florida, allegedly for armed robberies and a carjacking.

Earlier this week, the South Brunswick police tweeted, “We are aware of the video showing Antoine McDonald. He had a warrant issued for him in October of 2018 for car burglaries in South Brunswick and failed to appear in court. His warrant remains active.”

The “Bunny Beatdown” video shows an Easter Bunny kicking and punching the other man until police stopped the fight reportedly outside of the SAK Comedy Lab.

Many have hailed McDonald as a hero on social media, and have provided many Easter Bunny related puns.

Following the incident, according to Florida reports, he appeared on TMZ and on an Orlando TV program. He also created an Instagram account this week under the name @badbunnyof19, which already has nearly 11,000 followers.

The “Bunny Beatdown” happened around 10:30 p.m. on Easter Sunday in Orlando. In interviews, McDonald said he was bar-hopping with his girlfriend and relative when he saw the man and woman fighting outside of SAK. After McDonald got involved, a police officer eventually arrived to break-up the fight. According to reports, nobody was arrested.